France's antitrust regulator, the Autorité de la Concurrence, has fined Apple €1,1 billion for anti-competitive behavior towards its distributers and retailers. Wholesalers Tech Data and Ingram Micro were also fined €76,1 million and €62,9 million, respectively, for participating in the cartel.

After receiving a complaint in 2012 from eBizcuss, a distributor of specialised high-end Apple products (Apple Premium Reseller, APR), the Autorité de la concurrence fined Apple €1,1 billion, as well as wholesalers Tech Data and Ingram Micro €76,1 million and €62,9 million respectively. This decision to impose fines follows dawn raids carried out at the headquarters of Apple and its wholesalers, the litigation for which ended in December 2017.

Isabelle de Silva, President of the Autorité de la concurrence, stated: “ In the course of this case, the Autorité untangled the very particular practices that had been implemented by Apple for the distribution of its products in France (excluding Iphones), such as iPad. First, Apple and its two wholesalers agreed not to compete and prevent distributors from competing with each other, thereby sterilizing the wholesale market for Apple products. Secondly, so-called Premium distributors could not safely carry out promotions or lower prices, which led to an alignment of retail prices between Apple's integrated distributors and independent Premium distributors. Finally, Apple has abused the economic dependence of these Premium distributors on it, by subjecting them to unfair and unfavorable commercial conditions compared to its network of integrated distributors. Given the strong impact of these practices on competition in the distribution of Apple products via Apple premium resellers, the Autorité has imposed the highest penalty ever pronounced in a case (€1.24 billion). It is also the heaviest sanction imposed on an economic player, in this case Apple (€1.1 billion), whose extraordinary dimension has been duly taken into account. Finally, the Autorité considered that in this case Apple had committed an abuse of economic dependence on its premium retailers, a practice which the Autorité considers to be particularly serious. "

In France, Apple is accused of having implemented three anticompetitive practices within its distribution network of electronic products (except iPhone):
● Division of products and customers between its two wholesalers Tech Data and Ingram Micro
The two wholesalers concerned were also fined for having accepted and implemented the product and customer allocation mechanisms developed and supervised by Apple, instead of freely determining their business policy (see details of the fines in the summary table below).
○ These practices have somewhat “sterilised” the wholesale market for Apple products, freezing market shares and preventing competition between the different distribution channels for the Apple brand.

● Selling prices were imposed on APRs so that they apply the same prices as those charged by Apple itself in its Apple Stores and on its website.
○ The practice resulted in aligning the selling prices of Apple products for end consumers in almost half of the retail market for Apple products.

● An abuse of a situation of economic dependency on APRs (mostly SMEs), which has manifested itself in particular through supply difficulties, discriminatory treatment and unstable remuneration conditions for their business (discounts and outstanding balances). These practices consisted, in a context where the distributors’ margins were extremely low, in keeping the distributors extremely dependent on receiving products, particularly those most in demand (new products). For example, the Autorité found that when new products were launched, APRs were deprived of stocks so that they could not meet the orders placed with them, while the network of Apple Stores and “Retailers” was regularly supplied. This resulted in a loss of customers, including regular customers. In some cases, in order to meet an order, they were even forced to source from other distribution channels, for example, by ordering directly from an Apple Store as an end customer would have done, in order to supply their customers.
○ These practices led to the weakening, and in some cases, the exclusion of some of them, such as eBizcuss.

The Autorité says that "While a manufacturer is free to organise its distribution system as it sees fit, to designate different sales channels, to choose wholesalers to supply certain retailers and to reserve direct supply for other retailers, it must comply with competition law as long as the stakeholders in the distribution network are independent and not part of the company. In particular, it is prohibited for a manufacturer who heads a network to undermine competition between its wholesalers by pre-allocating customers to them, to have an agreement with its distributors on the retail prices charged to end consumers, or to abuse the situation of economic dependency of its trading partners, in particular by placing them at a disadvantage compared with its own internal distribution network."

“The French Competition Authority’s decision is disheartening. It relates to practices from over a decade ago and discards 30 years of legal precedent that all companies in France rely on with an order that will cause chaos for companies across all industries. We strongly disagree with them and plan to appeal.” 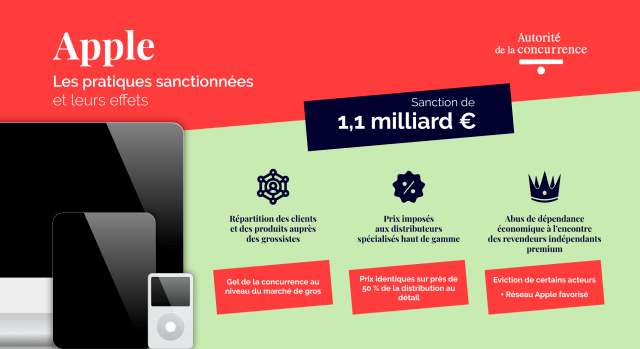