Inspired by the MacView tablet concept, CultofMac has suggested a great accessory idea for the iPad.

The concept by Patrycjusz Brzezinski called the MacView features two touch screens in a slider design. In one of the many renderings for the device, Brzezinski shows a docking station which looks similar to the bottom of an iMac.

CultofMac believes this concept would work great for the iPad, and we agree. Using a Bluetooth keyboard the iPad could act as a touch enabled mini iMac. If you need to go somewhere, simply undock the iPad, put it in your bag, and away you go. Definitely would look better than the keyboard dock. 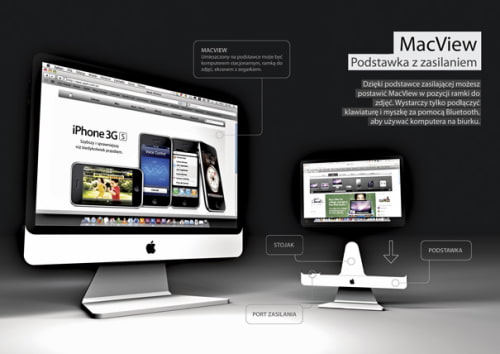 Onil - February 5, 2010 at 3:36pm
I don\'t think that it would be better thant the keyboard dock.. because, if you can\'t use a mouse with iPad (OS don\'t support it of course) there\'s no explanation to use that dock that looks like iMac (but it is beautiful) ! It would be usefull if iPad run MacOS instead of iPhoneOS...
Reply · Like · Mark as Spam

Nathaniel - February 5, 2010 at 3:40pm
Well hopefully a jailbreak will be found quickly thus enabling mouse support via BTstack. :)
Reply · Like · Mark as Spam

Jeff - February 5, 2010 at 3:28pm
Yeah, a bad move on their part to only put the doc adaptor so it can only be stood up one way...lame...what is the point of making a rotating device if you limit its docking to one side? It doesn\'t cost that much to splice another adaptor on the thing.
Reply · Like · Mark as Spam
3 More Comments
Recent