Apple's new iPhone SE accounted for 19% of US iPhone sales last quarter, according to a new report from Consumer Intelligence Research Partners, LLC (CIRP). The iPhone 11/Pro/Max accounted for an estimated 65% of sales during the same period.

“The Fall 2019 iPhone 11 and 11 Pro models remain the most popular, combining for around two-thirds of sales” said Josh Lowitz, CIRP Partner and Co-Founder. “Comparison again are tricky, with the launch of iPhone SE at the end of April 2020. A year ago, iPhone XR took almost half of sales in the quarter. This year, sales were divided among more diverse models, with even the lowest-priced and ultimately retired iPhone 8 and 8 Plus having 8% of sales. At the end of this past quarter, Apple has a simpler lineup than in the past, with just the XR, 11, 11 Pro, 11 Pro Max, and new SE. Within that lineup, iPhone SE accounted for a decent share at 19%, even though it was available for only a portion of the quarter. At $399 for the base model, SE comes is priced well below the year-old XR, and very successfully replaces the almost three- year-old iPhone 8 models at the entry price point.” 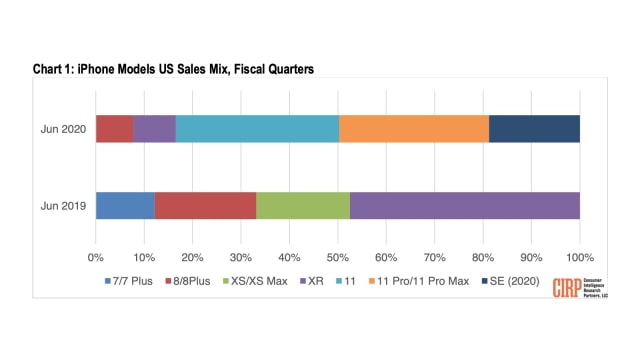 CIRP found that customers were likely to upgrade to an iPhone SE from a significantly older model iPhone.

“Every few years Apple comes out with a new low-priced iPhone, with up-to-date features, to sweep up the customers using the oldest iPhones,” said Mike Levin, CIRP Partner and Co-Founder. “iPhone SE seems to have reached this specific segment of long-time iPhone users. Even though operating system switching has diminished in recent years, even more SE buyers came from within the iOS installed base compared to buyers for other iPhone models. And, in the quarter, SE buyers had really old phones, with almost three-quarters having an iPhone that was three years old or more. So, they upgraded from iPhone 5, 6, or 7 models, which meant these users really waited awhile to buy a new phone. These are users who evidently resisted upgrading to newer phones at more attractive price points, such as iPhone 11, last year’s iPhone XR, and even the iPhone 8 and 8 Plus, which launched in 2017, as its prices declined over the years.”