Apple's iPhone 12 models are selling well but the iPhone 12 mini likely fell short of expectations, according to a new report from Consumer Intelligence Research Partners.

CIRP found that the new iPhone 12 models accounted for 76% of US iPhone sales in the period after their launch. The most popular model was the iPhone 12 with 27% of sales.

“iPhone 12 models garnered a significant share at launch, but with mixed results, as iPhone 12 mini seems to have been lost among the other models,” said Josh Lowitz, CIRP Partner and Co-Founder. “Apple not only launched a wider range of new models than ever before, and also divided that launch into two pairs of models, so comparison to earlier launches is tricky. In addition, Apple launched a new iPhone SE earlier in the year, further complicating the lineup. Compared to last year’s launch of iPhone 11 models, which accounted for 69% of sales in the period after the launch, the four iPhone 12 models did even better, with 76% of sales. However, there was no clear leader among the new models, with sales evenly distributed among iPhone 12, 12 Pro, and 12 Max. In contrast, in 2019, iPhone 11 had an incredible 39% of sales, with iPhone 11 Pro and Pro Max combining for only 30% of sales.”

“The new iPhone mini likely disappointed Apple with only 6% of sales in the period,” said Mike Levin, CIRP Partner and Co-Founder. “It has most of the same features as the other iPhone 12 models, in a smaller form factor for $699. Its share was just above that of iPhone XR, launched in 2018 and now priced at $499, the one-year old iPhone 11, now selling for $599, and the 2nd generation iPhone SE, launched in April 2020 at $399. It seems that it’s higher price point compared to those three models limited the iPhone 12 mini appeal.” 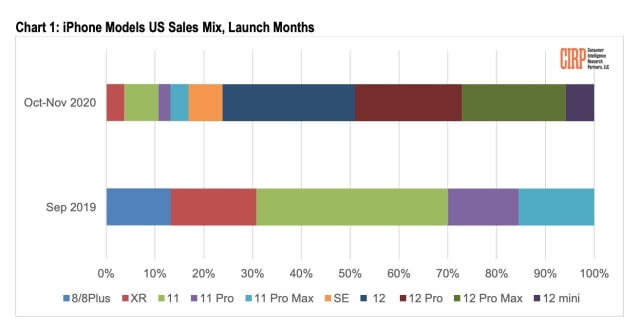 Maldaxas2000 - January 6, 2021 at 12:40am
Strange... 12 mini is the best iPhone I had so far. Price - good, performance and cameras - very good, size - excellent. And I am not small guy - 193 cm, so hands are not small too, but 12 mini fits perfectly. Before it I had an iPhone 8 and thought it is excellent but I've always waited similar size phone only with full size screen. In my opinion Apple decision to release something like this was brilliant.
Reply · Like · Mark as Spam
Recent