Apple's acquisitions totaled $33 million this year, a record low for the company with Tim Cook as CEO, reports AboveAvalon.

Since 2006, Apple has spent $20.6 billion on mergers and acquisitions with about half tied to "business acquisitions". The median is $1 billion per year. Industry wide, M&A activity is up 50% this year making Apple's $33 million spend even more unusual.

Analyst Neil Cybart believes that Apple made few acquisitions this year due to where the company is in its product pipeline.

My suspicion is that 2021 was a quiet M&A year for Apple given where the company finds itself from a product pipeline perspective. For the better part of the past five years, Apple’s mixed reality/AR plans have been the catalyst behind approximately 20% of Apple’s M&A deals. Apple’s foray into face wearables is now right around the corner - so close that the company likely has the main ingredients to get a V1 and V2 out the door without the need for additional M&A. Meanwhile, long-term R&D projects like Project Titan are still too far away to lead to a sudden M&A rush. Over the past five years, only three Apple acquisitions can be tied to its automotive ambitions.

Apple's strategy for acquisitions is to fill talent and technology holes that surface during product development. If Apple's car project progresses, we could see some automotive related acquisitions in the next few years. 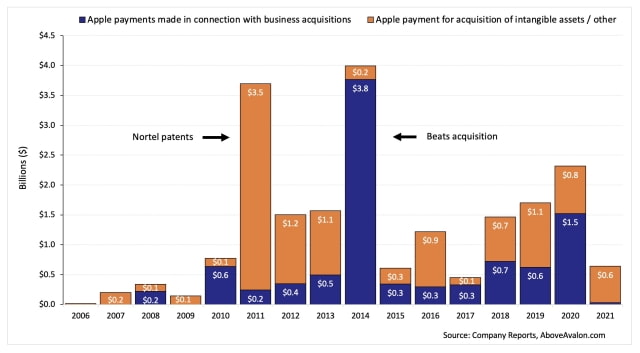