"Sorenson Squeeze 5 sets the standard for desktop encoding applications, this is by far the best Squeeze yet," said Nate Caplin, manager of Streaming Media, AEP. "Squeeze 5 improves upon its familiar, friendly interface with solid usability refinements, especially for managing presets, previewing video and working with filters. Even more important, Squeeze 5 improves results through dramatic quality and performance tune-ups under the hood.” 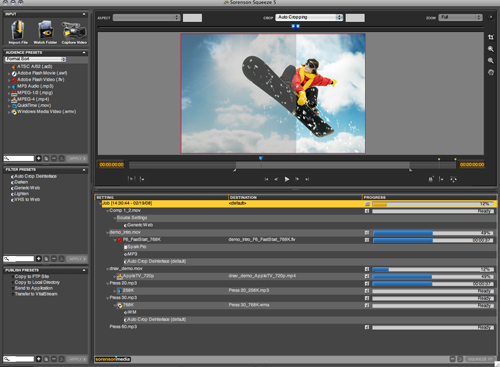 Sorenson Squeeze 5 dramatically reduces encode times on multi-core machines by allowing users to compress and encode as many as 1.5 files on each of the host computer’s processor cores, enabling a quad-core processor, for example, to process six files simultaneously.

Squeeze 5 includes a number of technologies to improve video quality. For Blu-ray encoding, the highly efficient VC-1 video encoder is now included. Significant quality improvements have been made for MPEG-1, MPEG-2 and H.264 encoders, especially when using HD settings. New video pre-processing filters include Watermark, Hue-and-Saturation, Sharpen, and significant improvements have been made in the Inverse Telecine, Video Fade and the Deinterlacing filters, all resulting in higher quality video.

Sorenson Squeeze 5 embraces the long-time Squeeze tradition that uncomplicated workflow is essential for users. The new Audience Presets feature allows users to bundle preprocessing filters, filter order, encoding settings and even output destinations, such as FTP, into a single custom preset. Squeeze 5 also allows presets to be sorted by either format or output target. In addition, a convenient active-search feature built into the preset lists allows users to quickly find what they need.

“Sorenson Squeeze 5 is a dramatic step forward in the crucial attributes Sorenson has long been known for: high quality video and ease of use,” said Matt Cupal, president and COO of Sorenson Media. "We believe users will find this major release saves them a significant amount of time during both setup and encoding while creating better output quality. We’re thrilled to bring Squeeze 5 to the market and we believe users will be enthusiastic about it as well.”