Lenovo CEO Yang Yuanquing says he plans to challenge the iPad's dominance by appealing to people who can't afford the device, according to a FinancialTimes article.

Lenovo recently overtook Acer as the third largest PC maker and hopes to extend the company's success into tablets as well.

"We will be one of the strongest of the players in this area," said Yuanquing. "Apple only covers the top tier," he says. "With a $500 price you cannot go to the small cities, townships, low salary class, low income class. I don't want to say we want to significantly lower the price, rather our strategy is to provide more categories, to cover different market segments."

Yuanguing compares Apple's position to that of IBM's after it created the PC Market. "Apple is very strong, but when IBM created the PC market there was just IBM, if you look at the PC industry now it is very diversified. I believe that will happen in tablets as well."

Yuanguing comments come after a recent report that Apple has handling outsold the company in greater China with $3.8 billion in sales in Q2. Lenovo sales were $2.8 billion for the same time period. Despite claiming to appeal to a lower income market segment, Lenovo's cheapest tablet is priced only $20 lower than the iPad. 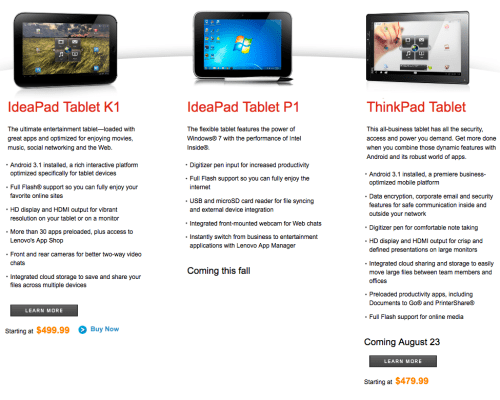 Pain Reaper - August 23, 2011 at 5:54am
The iPad runs in a league of its own.. Android tablets only compete with themselves.. Lame to still write that every Android device is challenging the iOS devices.. -.-
Reply · Like · Mark as Spam
0

human.0.id - August 22, 2011 at 6:39pm
Another epic fail. Any Android device will not challenge the iPad, ever! Too late, guys. Apple spent years to develop iTunes, AppStore, SDK, and these are their unbeatable trumps.
Reply · Like · Mark as Spam
0