RIM has filed an opposition to Apple's trademark registration for 'WebKit' in Canada, according to Patently Apple.

WebKit is an open source web browser engine and the name of the Mac OS X system framework version of the engine that's used by Safari, Dashboard, Mail, and many other OS X applications. WebKit's HTML and JavaScript code began as a branch of the KHTML and KJS libraries from KDE. It's used as a basis for the Safari, Chrome, and Kindle browser.

As Patently Apple notes, it's currently unclear as to why RIM is opposing the WebKit trademark.

Research in Motion has been granted until November 22, 2011 to produce their official opposition details. Until the contents of RIM's opposition are officially made public, we're a little in the dark. With that said, it wouldn't surprise me in the least if details of their complaint and opposition to Apple's WebKit trademark application eventually leak out by parties interested in seeing Apple's trademark application go down in flames. Time will tell. 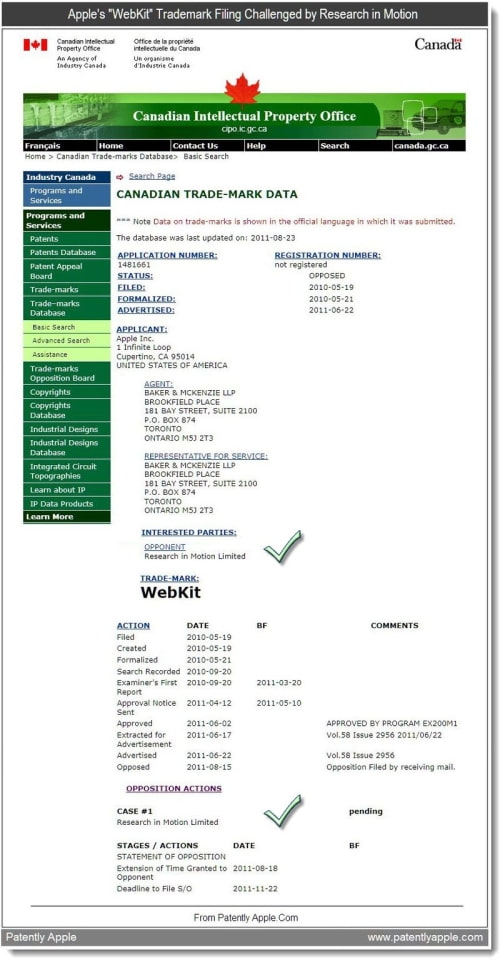 Mike - August 29, 2011 at 7:46pm
All cell phone makers should fight every apple patent and then copy everything they can.... Rim is bloody and near dead.... Shows where poor leadership will take a company
Reply · Like · Mark as Spam
Recent