The iPhone Dev-Team has updated RedSn0w with support for jailbreaking iOS 5.0.1 which is currently beta and can only be downloaded by iOS developers.

redsn0w version 0.9.9b8 will natively recognize the 5.0.1 beta that Apple let developers start testing this week (so you don't have to play the "point at 5.0 IPSW" trick). Because the IPSW isn't public, you'll still need to provide it once to redsn0w (at which point it will cache all the important pieces so you don't need to select it again).

For those 3GS and i4 users who preserve their baseband, the Mac version can also produce the NO_BB_* custom IPSWs for 5.0.1. (But please note that ultrasn0w doesn't get updated for betas like this.)

This is still a tethered jailbreak for all except old-bootrom 3GS users. 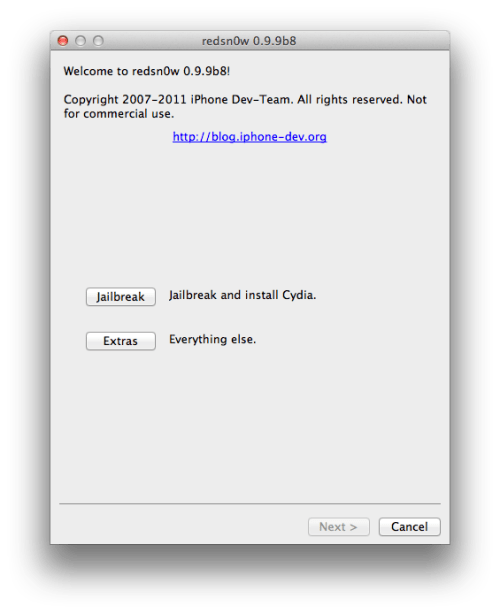 raja - November 4, 2011 at 12:39pm
what are behind dev team n apple?should they maked all iphone unlockeble forever??
Reply · Like · Mark as Spam

Jailbreak - November 3, 2011 at 8:19pm
Man I hate my iphone4s without a jailbreak! it really sucks not because of installous Because of the tweeks like 5 docks change my fonts,different themes.. SB settings love that and lock info is the shit better than a copy of IOS 5 I love evethig bout jailbreak.. I can't wait..I've been using my old iPhone 4 rather than Iphone4S.
Reply · Like · Mark as Spam