AuthenTec, a provider of mobile and network security solutions, has announced that it's been acquired by Apple for $8 a share which calculates to $356 million, reports TNW.

The deal was revealed in the company's 8-K filing:

--
On July 26, 2012, AuthenTec, Inc., a Delaware corporation (the "Company"), entered into an Agreement and Plan of Merger (the "Merger Agreement") with Apple Inc., a California corporation ("Parent"), and Bryce Acquisition Corporation, a Delaware corporation and a wholly owned subsidiary of Parent ("Merger Sub"), providing for the merger of Merger Sub into the Company (the "Merger"), with the Company surviving the Merger as a wholly owned subsidiary of Parent. The Merger Agreement was unanimously approved by the Company's Board of Directors.

At the effective time of the Merger, each share of Company common stock issued and outstanding immediately prior to the effective time (other than shares (i) held by the Company in treasury, (ii) owned directly or indirectly, by any of the Company's wholly owned subsidiaries, Parent, or Merger Sub or any other direct or indirect wholly owned subsidiary of Parent, or (iii) held by stockholders who have perfected and not withdrawn a demand for appraisal rights under Delaware law) will be automatically cancelled and converted into the right to receive $8.00 in cash, without interest.
---

AuthenTec has over 200 filed and issued U.S. patents and signed an agreement with Samsung just last week, using its "QuickSec VPN security for use in its new Android smartphone and tablet models."

AuthenTec encryption technology, fingerprint sensors and identity management software are deployed by the leading mobile device, networking and computing companies, content and service providers, and governments worldwide. AuthenTec's products and technologies provide security on hundreds of millions of devices, and the Company has shipped more than 100 million fingerprint sensors for integration in a wide range of portable electronics including over 15 million mobile phones. 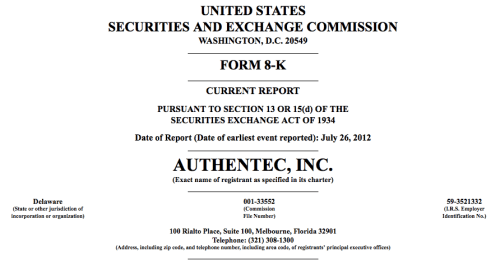 BogartCagney - July 27, 2012 at 7:05pm
Just hilarious!!! You almost want to feel bad for Samsung but then you get to thinking about it and realize just how funny it is!
Reply · Like · Mark as Spam
Recent