The late hearing means that an injunction will have less impact; however, it will still take place before the holidays. You can see a list of the devices Apple is looking to ban here. 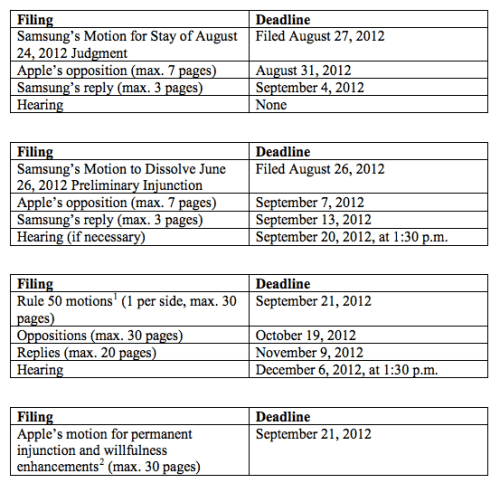 NoGoodNick - August 29, 2012 at 3:04pm
Meaning that despite stealing Apple's technology, they're free to continue selling the products and profiting from the theft throughout the holiday season. Opening evidentiary hearings won't mean much to the millions that Samsung will continue to rake it, and they'll easily make up much of the penalty they've already been slapped with. Again, it just shows that money justifies everything. If you steal enough, it doesn't matter whether you're guilty or not, you're allowed to continue stealing.
Reply · Like · Mark as Spam

agree - August 29, 2012 at 3:47pm
I agree wit you Nick if it was me or you that stoled something they will put you to jail for long time. and have a felony on your record. Samsung should be punished for all these actions. They knew between right and wrong. But that's ok before christmas santa clause is going to visit them,take everything from them. It never works on thieves favor no matter what when you are a thief it will catch up to you sooner or later. Finally Steve Jobs spoked out from his grave..
Reply · Like · Mark as Spam

Stevein Hell - August 29, 2012 at 7:51am
Americans should ban all asian products and let see if they will still exists in Earth after 2 years.
Reply · Like · Mark as Spam
1 More Comment
Recent