Apple may have accidentally leaked that the company plans to unveil new Beats products at its September 7th special event.

The company sent iGen.fr a press email which reads:

The Apple Keynote, awaited by all lovers of technology! Do not miss this event, a selection of new Beats by Dre products will be revealed September 7th, 2016.

Notably, the iPhone 7 is rumored to be shipping with new Apple earphones, possibly wired and wireless. We've also heard rumors that Apple has been developing a new set of Beats Bluetooth wireless earphones that will launch alongside the iPhone 7. The headphones are said to be completely wireless without anything connecting the left and right earbuds. They are apparently similar in concept to the Bragi Dash headphones. 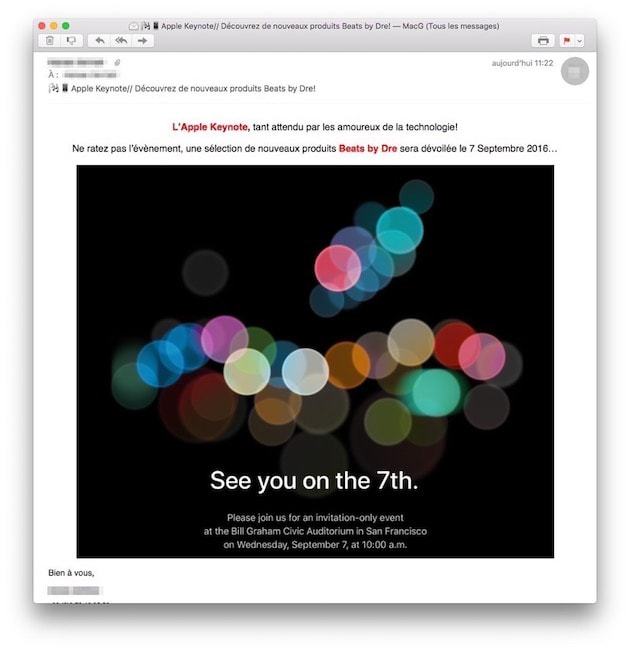 Garbage - September 2, 2016 at 6:16pm
Beats are marketed to hip hop culture idiots. Look around and see who's wearing them. Sheep who only wear nike shoes - check, wear their pants with saggy ass - check, drive nice cars that are leased that they can't afford while they live in low-income housing - check, eat at Church's chix 3 times a week - check. etc, etc.
Reply · Like · Mark as Spam

Robert Yuna - September 5, 2016 at 4:53am
The most thoroughly racist public comment I've read in years.
Reply · Like · Mark as Spam

Facts Only - September 5, 2016 at 3:56pm
I live in the project but work in the suburbs and I can tell u that I only see beats on rich white boys, aint nobody in the hood going to spend $300(Jordan money) on no head phones. fuk outta here ur statement have been voided
Reply · Like · Mark as Spam