Apple CEO Tim Cook explained why he participated in a recent tech summit held by President-Elect Donald Trump in a response to a question on Apple's internal employee info service today.

TechCrunch obtained the communication and says it's been verified as legitimate.

Here's the question and answer as posted...

---
Question:
Last week you joined other tech leaders to meet President-elect Donald Trump. How important is it for Apple to engage with governments?

Answer:
It’s very important. Governments can affect our ability to do what we do. They can affect it in positive ways and they can affect in not so positive ways. What we do is focus on the policies. Some of our key areas of focus are on privacy and security, education. They’re on advocating for human rights for everyone, and expanding the definition of human rights. They’re on the environment and really combating climate change, something we do by running our business on 100 percent renewable energy.

And of course, creating jobs is a key part of what we do by giving people opportunity not only with people that work directly for Apple, but the large number of people that are in our ecosystem. We’re really proud that we’ve created 2 million jobs, just in this country. A great percentage of those are app developers. This gives everyone the power to sell their work to the world, which is an unbelievable invention in and of itself.

We have other things that are more business-centric — like tax reform — and something we’ve long advocated for: a simple system. And we’d like intellectual property reform to try to stop the people suing when they don’t do anything as a company.

There’s a large number of those issues, and the way that you advance them is to engage. Personally, I’ve never found being on the sideline a successful place to be. The way that you influence these issues is to be in the arena. So whether it’s in this country, or the European Union, or in China or South America, we engage. And we engage when we agree and we engage when we disagree. I think it’s very important to do that because you don’t change things by just yelling. You change things by showing everyone why your way is the best. In many ways, it’s a debate of ideas.

We very much stand up for what we believe in. We think that’s a key part of what Apple is about. And we’ll continue to do so.
--- 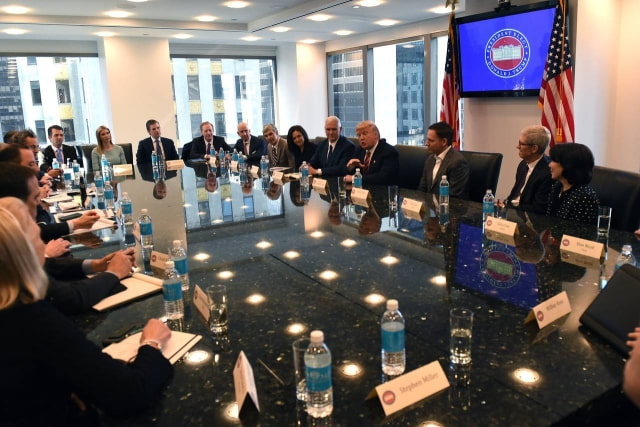 PCO - December 22, 2016 at 8:35pm
I give Tim Cook a lot of credit for attending any kind of meeting with the the President Elect. It is going to be a challenging 4 years for companies like Apple. This isn't a about who is liberal and who isn't. It is about building a bridge to the future economy of the USA. I applaud Apple for any job created or brought back to the USA. Also, for the record Apple had planned on bringing jobs back to the USA before the Presidential Primaries started. Don't think for a minute, the President Elect had anything to do with any employment opportunities with Apple in the USA.
Reply · Like · Mark as Spam

Sarah terra - December 21, 2016 at 3:35am
So basically we want to troll other companies and sue whenever convenient, but or be subject to those same standards... typical left wing hypocracy
Reply · Like · Mark as Spam