Services will drive almost all of Apple's revenue growth over the next five years, according to Morgan Stanley analyst Katy L. Huberty.

"We see increasing value in the Apple platform, particularly through services monetization," Huberty writes. Although "over the last five years, the vast majority (86%) of Apple's 8% annual revenue growth was driven by iPhone sales, it is through monetization of Apple's Services business that we see the company still generating mid single digit revenue growth."

Huberty estimates that about 60% of revenue growth is currently attributed to services. That, alongside wearables, "will drive almost all of Apple's growth over the next five years."

Revenue from services is at about $30 per device, up from $25 two years ago; however, Huberty says that "this metric under estimates the long-term revenue potential." Since most Apple users don't pay for services, revenue for 'active' users is well above that, possibly double. Huberty thinks that number could approach $100 or more in the future.

Morgan Stanley lists a few areas that they believe are not fully monetized:
● Apple Music has grown considerably, and yet only 2.9% of Apple users have it, currently.
● iCloud subscribers are growing, and Apple is launching two new data centers in China.
● Apple Pay is in 50% of US retail locations, and usage is still low. 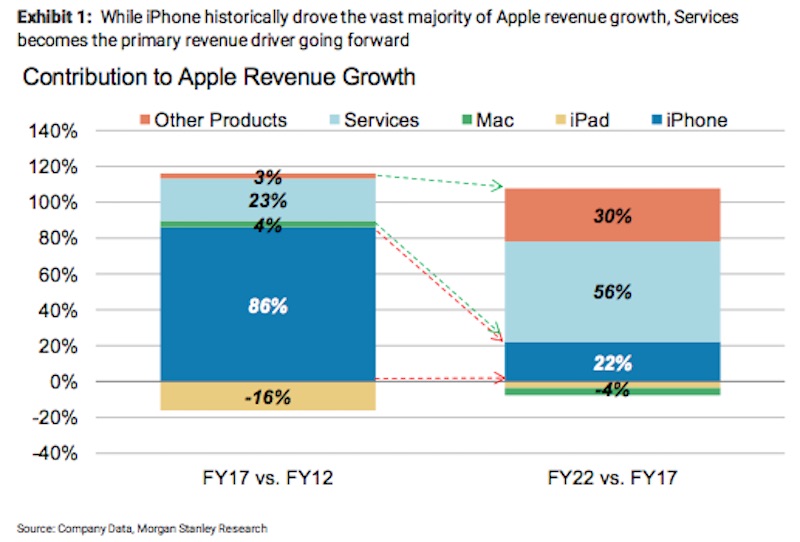 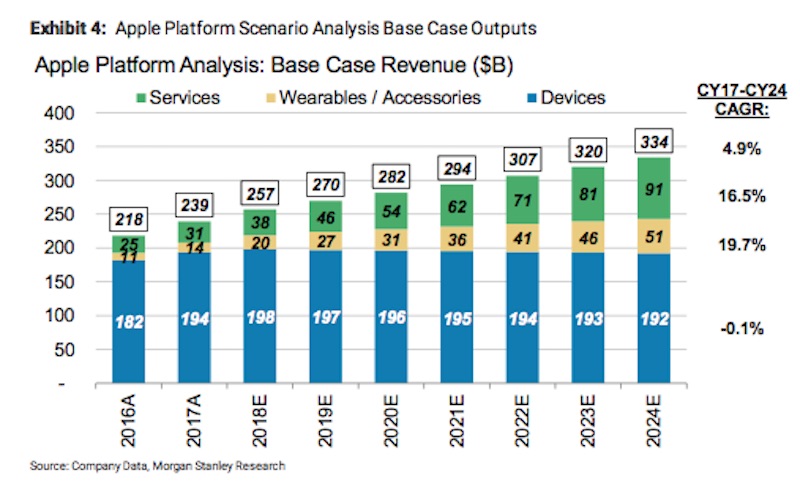 joaco - March 22, 2018 at 7:35pm
Hope Apple starts to make progress on th Siri platform being as ubiquitous as possible, I think voice assistant will grow inmensly. Apple has a geat user base, and the Homepod is a great platform to expand the use of Siri. Integration with developers is key for such success through Sirikit. This has always be the case, Mac failed in the 90s due to the lack of developers, Iphone thrived, due to such support, Alexa is ahead also due to integration with developers. Hope Apple gives a huge leap I think 2018 is a key year for such integratino and platform to start growing, the company has given too much field for others to grow. Hopeit catches up, and even get to be the reference. Thks
Reply · Like · Mark as Spam

iSheep - March 22, 2018 at 8:50pm
Given the fact that Siri on their own HomePod is shit, you expect it to become the reference? LOL
Reply · Like · Mark as Spam
Recent