Apple's iPhone X was the world's best selling smartphone in the first quarter of 2018 with Apple shipping an impressive 16 million units, according to the latest Strategy Analytics report. The iPhone 8, iPhone 8 Plus, and iPhone 7 took second, third and fourth place. The most popular Android smartphones were the Xiaomi Redmi 5A and Samsung Galaxy S9 Plus.

Neil Mawston, Executive Director at Strategy Analytics, said, “Global total smartphone shipments reached 345.4 million units in Q1 2018. The top-six most popular models together accounted for 1 in 7 of all smartphones shipped worldwide during the quarter.”

Linda Sui, Director at Strategy Analytics, added, “We estimate Xiaomi Redmi 5A shipped 5.4 million units for fifth place and 2 percent marketshare worldwide in Q1 2018. Xiaomi has become wildly popular across India and China. Xiaomi is selling a huge volume of smartphones through online channels, with key retail partners including Flipkart and JD.”

Woody Oh, Director at Strategy Analytics, added, “We estimate Samsung Galaxy S9 Plus shipped 5.3 million units for sixth place and 2 percent marketshare worldwide in Q1 2018. Samsung’s new flagships, Galaxy S9 and S9 Plus, only started shipping toward the end of the first quarter, but shipments are already off to a very good start. The S9 Plus delivers an attractive, bezel-less, curved-screen design, a rich portfolio of software apps, and best-in-class retail distribution across dozens of countries. We expect the S9 Plus to become the best-selling Android smartphone globally in the second quarter of 2018.” 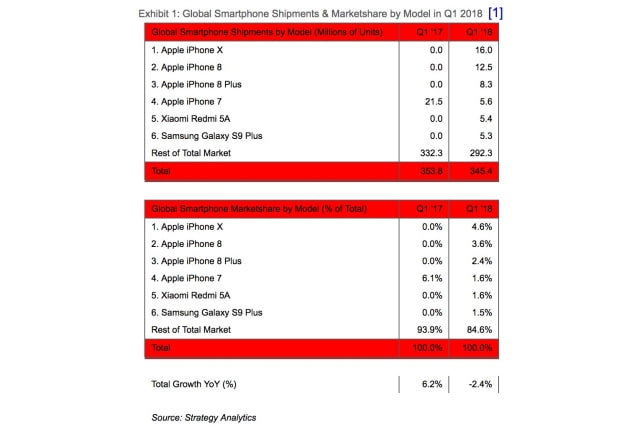