Warren Buffett has revealed that Berkshire Hathaway bought 75 million shares of Apple in the first quarter of 2018, reports CNBC. That adds to the 165.3 million shares the company already owned at the end of 2017.

"It is an unbelievable company," Buffett says. "If you look at Apple, I think it earns almost twice as much as the second most profitable company in the United States." 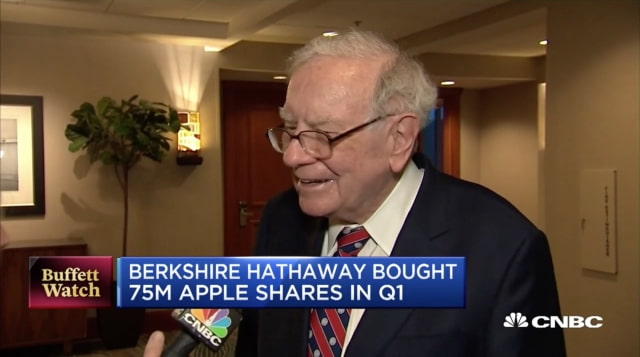 Berkshire Hathaway was buying shares in Q1 despite speculation that the iPhone X was performing poorly and Apple had dwindled down production.

"The idea that you're going to spend loads of time trying to guess how many iPhone X ... are going to be sold in a 3 month period totally misses the point," Buffett says. "It's like worrying about the number of BlackBerrys 10 years ago."

Apple sold 52.2 million iPhone units in the Jan-Mar quarter, up 3% year over year. The iPhone X, iPhone 8, iPhone 8 Plus, and iPhone 7 were the top four selling smartphones in the world.