The iPhone 11 was the best selling smartphone in the first half of 2020, according to a new report from Omdia. Apple is said to have shipped 37.7 million units of the iPhone 11 making it the most popular smartphone by far.

Like iPhone XR last year, the cheapest of the 2019 iPhones ranked first in global shipments this year. Despite the impact of Covid-19 in the first half of this year and the movement restrictions imposed in various countries along with it, and production disruptions, iPhone 11 shipped 10.8 million more units than last year's No. 1, iPhone XR. A key driver for the success of iPhone 11 is the lower starting price. iPhone 11 launched $50 cheaper than the previous iPhone XR while adding significant hardware improvements, like a dual-lens camera. iPhone XR did not feature such upgrades.

Take a look at the chart below and hit the link for more details... 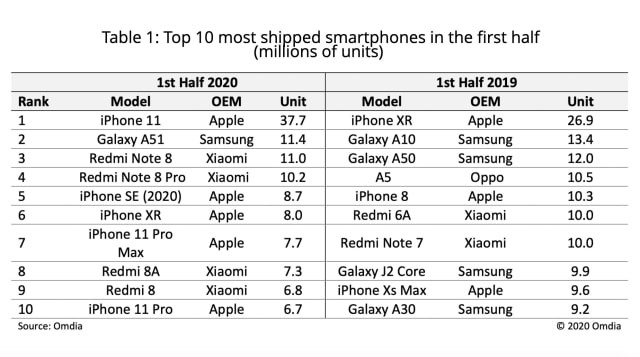