Adobe has just released the last ever update to Flash Player outside of Mainland China.

Today marks the final scheduled release of Flash Player for all regions outside of Mainland China. We want to take a moment to thank all of our customers and developers who have used and created amazing Flash Player content over the last two decades. We are proud that Flash had a crucial role in evolving web content across animation, interactivity, audio, and video. We are excited to help lead the next era of digital experiences.

Adobe will no longer support Flash Player after December 31 2020 and Adobe will block Flash content from running in Flash Player beginning January 12 2021. The company says it strongly recommends all users immediately uninstall Flash Player to help protect their systems.

The demise of Flash comes over ten years after Apple co-founder Steve Jobs wrote an open letter explaining why the company wouldn't allow it on iPhones, iPads, and iPod touch devices.

More details can be found on the Adobe Flash Player End of Life page linked below. 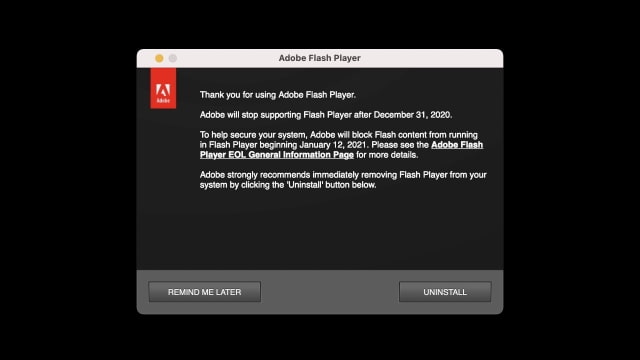