CBS This Morning is teasing a 'big announcement' that Apple will make tomorrow on the show.

In highlights from the interview, Cook addresses the removal of the Parler app from Apple's App Store and says that protestors who stormed Capital Hill should be held accountable. CBS stresses that Cook's appearance was previously scheduled without the intent of discussing politics. However, Cook's statements are likely to draw the ire of critics who accuse the App Store of antitrust violations and those who note the CEO never called for protestors to be held accountable for riots and uprising across the country this past summer.

Listen, we should say he didn't sit and say, "You know I want to talk to CBS about this". This was an interview that was scheduled because they have a big announcement that they want to announce tomorrow. It is not a new product, we should say, it is not a new product. It's something I think bigger and better than that. So, we did an interview and we did it at the Apple Store here and he's at his headquarters and he agreed to answer other questions but that wasn't the purpose of the interview. It's very exciting, what we're going to tell you about tomorrow is very exciting. 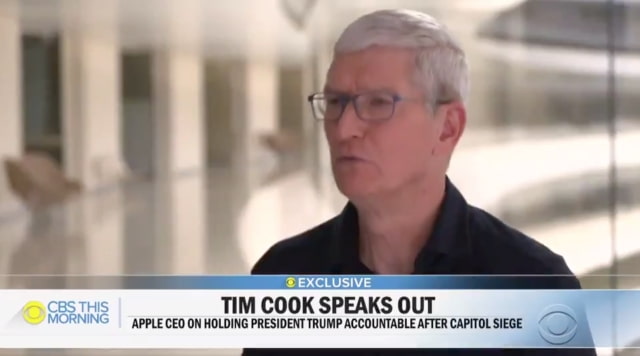