A group of major news publishers have joined the battle against Apple over its App Store terms, reports the WSJ.

In a letter to Apple Chief Executive Tim Cook on Thursday, a trade body representing the New York Times, the Washington Post, The Wall Street Journal and other publishers said the outlets are looking to qualify for improved deal terms to keep more money from digital subscriptions sold through Apple’s app store.

Recently, Epic Games filed a lawsuit accusing the company of anticompetitive practices. Additionally, both Microsoft and Facebook have spoken out about the company's policies. Currently, news publishers must pay Apple 30% of their revenue from first year subscriptions and 15% after that.

Here's the letter from Digital Content Next to Apple CEO Tim Cook:

On behalf of Digital Content Next (DCN), I am reaching out to you to better understand the “conditions” you mentioned in your July 29th remarks before the House Judiciary Committee. We would like to know what conditions our members – high quality digital content companies – would need to meet in order to qualify for the arrangement Amazon is receiving for its Amazon Prime Video app in the Apple App Store.

DCN is the only trade organization dedicated to serving the unique and diverse needs of the most trusted and well-respected media brands that, together, have an unduplicated audience of 223,098 million unique visitors or 100 percent reach of the U.S. online population. These brands enjoy trusted, direct relationships with consumers and advertisers. Many of our members provide their customers access to content through subscriptions, a model that two-thirds of subscribers (64%) perceive has a high value.

In response to Rep. Hank Johnson’s question on whether the arrangement afforded Amazon is “available to any app developers,” you responded affirmatively that they are available to “anyone meeting the conditions. ” In evidence released by the Committee after the hearing, it appears the terms provided to Amazon include a significantly increased net revenue structure.

Nearly all of DCN’s members offer apps in the Apple App Store and, as noted above, many offer subscription-based access to a wide variety of content. The terms of Apple’s unique marketplace greatly impact the ability to continue to invest in high-quality, trusted news and entertainment particularly in competition with other larger firms. In keeping with your statement to the Committee, I ask that you clearly define the conditions that Amazon satisfied for its arrangement so that DCN’s member companies meeting those conditions can be offered the same agreement. I look forward to discussing this with you. 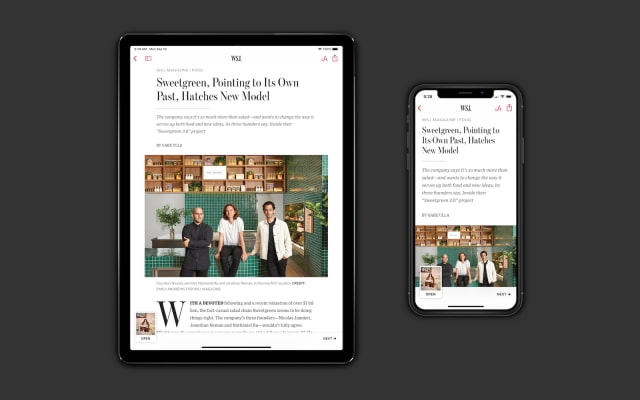 PaulieP - August 27, 2020 at 9:08pm
IClarified, do you monitor childish activities in your forums? Please do, it’s unhelpful to the comments section when trolls cry because they want attention. Might be time for a ban. Again, it’s unnecessary and counterproductive to intellectual conversations.
Reply · Like · Mark as Spam

NoGoodNick - August 20, 2020 at 8:11pm
Personally, this is one battle that Apple deserves to lose! While the original ‘right to publish’ lawsuits never went anywhere, since Amazon raised an entirely new legal status with the creation of an ‘independent publisher’ class, the ONLY winner in this current clash are Apple and Amazon, neither of which enjoy much public support for their clearly abusive practices. While Apple now has 2 Trillion to feed a fleet of lawyers with, the fight will only further erode their consumers’ confidence, even as Apple’s quality continues to decline. Alas, they’re fighting a losing battle, and all they can hope for is too stall the eventual decision indefinitely.
Reply · Like · Mark as Spam

PaulieP - August 21, 2020 at 2:22am
If Apple adjust its prices, you will see that it will get worse for the consumer. The sum, 30% might not seem fair but when you are a publicly traded company, you have a role and responsibility to keep shareholders happy, shareholders being the public. If Apple decided to change the percentage in favor of epic games or Spotify, etc, the SEC would step in and fine Apple. Also, any company that uses Apple’s App Store has everything at their fingertips because Apple’s engineering team has done a fantastic job with the back end of the App Store for tracking, communications, updates, sales, refunds and more. Believe it or not apple does a lot for the consumers and the companies that chose to be on the App Store. Let’s also remember that without the App Store, these companies would have had no traction in achieving the goals they have a long side Apple‘s App Store and the iOS platform.
Reply · Like · Mark as Spam

NoGoodNick - August 21, 2020 at 5:09pm
Unfortunately, that’s what started this fight, as Apple offered Amazon a special rate they wouldn’t allow anyone else, and the Trump FCC didn’t say jack about it. More than anything else, the suppliers want data. It’s one thing to offer special rates, but Epic and others want to know what level of sales they’d have to offer to get the same deal. If Apple did release the info., and they couldn’t match it, it would short circuit their entire legal claim. On the other hand, virtually every large-scale publisher HATES Apple News, and many (notably The NY Times and the Washington Post) have abandoned it, since the insignificant additional sales don’t offset the huge 30% fees that Apple’s leveling. Apple made a bad situation worse by stopping the new stories from relating to the news sources, cutting their revenue streams even more.
Reply · Like · Mark as Spam

PaulieP - August 21, 2020 at 11:03pm
Well said. Apple should monetize based on sales tiers not just a flat 30% for all and they also need to be transparent about their deals with companies like amazon or google. Since the SEC is now involved, it makes it a lot more difficult to make any kind of change. I’m curious to see how this will go. I do hope the percentage is tiered for the benefit of the companies that work with the App Store based on their sales. They could really help out smaller companies and larger companies. Incentives could also be offered if companies are able to achieve higher goals during quarterly periods. Regardless, it’s not going to be easy but I hope they come to an amicable solution that’s good for all parties. That’s the kind of company I would like Apple to be. Let’s see what happens
Reply · Like · Mark as Spam
2 More Comments
Recent