The global smartphone speaker market is expected to grow to 56.3 million shipments in 2018, according to a new report from Canalys.

Amazon and Google are expected to remain in the lead with their Echo and Home products respectively, but will face increased competition as new vendors enter the race. The US will remain the single most important market for smart speakers in 2018, as shipments are expected to reach 38.4 million units, with China a distant second at 4.4 million units.

“2018 will be the defining year for smart speaker adoption,” said Canalys Research Analyst Lucio Chen. “Smart speaker uptake has grown faster than any other consumer technology we’ve recently encountered, such as AR, VR or even wearables. While 2017 has been a banner year for smart speakers in terms of hardware sales, especially for Google and Amazon, smart speakers in 2018 will move beyond hardware, with strategic attempts to monetize the growing installed base in the US and beyond. The possibilities to do this are endless, be it discreet advertising, content subscription bundles, premium services or enterprise solutions. The technology is still in transition, and increased investments from multiple players of the ecosystem will fuel growth.”

“Consumer acceptance of the smart speaker has been positive overall, despite a few shortcomings,” said Canalys Analyst Vincent Thielke. “Vendors have begun offering successful upgrades to their latest models, and a key element driving this stickiness are the smart home partnerships. Alexa’s multiple smart home integrations, Google’s partnership with Nest and Apple’s HomeKit initiatives will continue to excite consumers of the smart speaker and fuel sales in 2018.”

Despite success in the U.S. and Western Europe, Canalys believes Amazon and Google will struggle in China. The country's restrictions are expected to allow local vendors such as Alibaba, JD.com, and Xiaomi to catalyze a healthy local market.

“Market dynamics in China can change very quickly,” said Lucio Chen. "Traditional hardware vendors have been cautious at the beginning, but with deep-pocketed Alibaba ramping up investment in the category, and Xiaomi launching lower priced skews of its XiaoAI smart speaker, the market will be ignited in no time."

Apple suffered a setback in launching the HomePod last year, missing the holiday shopping season. The company says the HomePod should arrive in early 2018; however, at a price much higher than any of Amazon's Echo devices, it may struggle to gain market share. 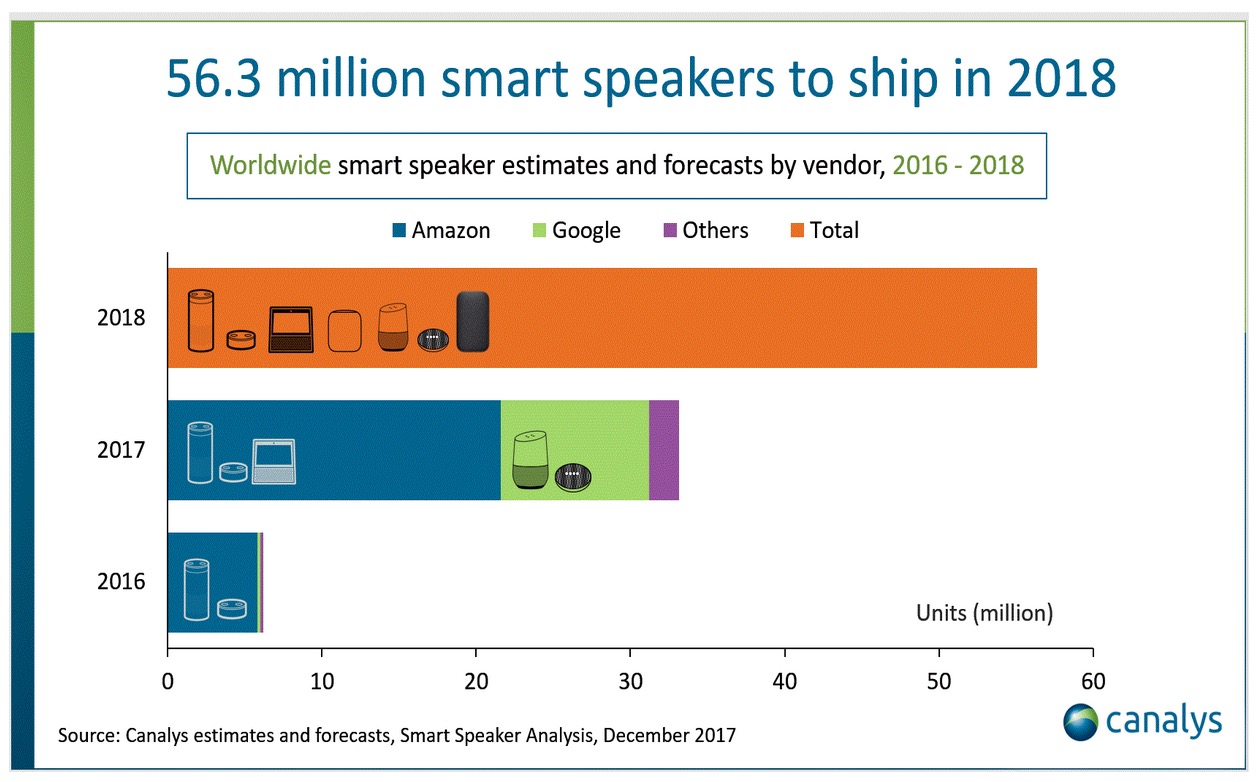