Instagram CEO Adam Mosseri is speaking out against an ad tracking change Apple has planned for iOS 14.

Apple had planned to force developers to request permission for in-app ad tracking with the launch of iOS 14. Last month, Facebook warned publishers that this could result in a revenue reduction of over 50%. More recently, it criticized the move in a formal filing with the European Commission, questioning whether Apple would would adhere to the requirement itself.

Following concern from developers, advertisers, and publishers, Apple has delayed the rollout of the feature until next year; perhaps giving the ad industry some time to recover from the pandemic.

On CNBC’s “Squawk Box” Friday morning, Mosseri said the feature would take away the ability to show users revelant ads and provide value for advertisers.

While Mosseri says Instagram will make the case as strongly as possible, he noted the company has little influence over Apple who is the sole gatekeeper for apps across a billion devices. The company does "own the majority of the market here in the U.S." as it pertains to smartphones and "[controls] the ecosystem end-to-end." 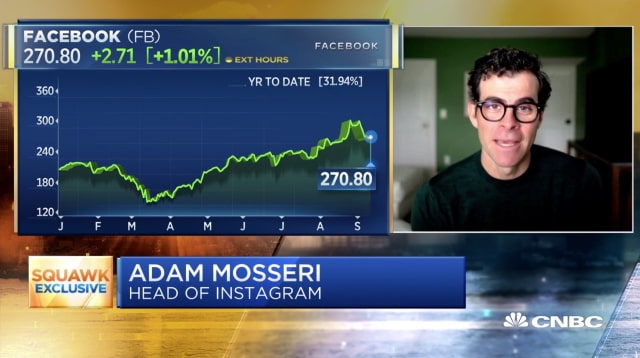 iAmMe - September 11, 2020 at 4:19pm
IG thinks we’re stupid enough to think that they are a different company than Facebook. Lol
Reply · Like · Mark as Spam
Recent